Introducing the world’s thinnest skeleton movement in the...... The iconic luxury sports watch goes skeleton and unveils all its mechanical glory.

Piaget has been crafting luxury watches since 1874 but it still manages to reinvent itself in the most unexpected, and innovative of ways. From crafting the world’s thinnest hand-wound mechanical watch to fancy cufflink watches, the Swiss watchmaker has now unveiled the thinnest skeleton movements the world has ever seen.

Introducing the reinvented Piaget Polo Skeleton, it is the latest groundbreaking addition to their extensive arsenal of watches.

Riding the fame of the iconic luxury sports watch Piaget Polo that was first launched in the 1970s, the new design strips it down to the very core of the timepiece, revealing the bones and beating heart in all of its mechanical glory. The Piaget Polo Skeleton with its symbolic curved case surmounted by a round bezel, cushion-shaped dial opening and its slim profile.

The Thinnest Skeleton Movements Ever Seen In A Watch

Since Piaget has long been renowned for creating intricate mechanisms of exceptional slimness, the Piaget Polo Skeleton is a testament to yet another groundbreaking creation as it combines the meticulously thin skeletal movements with tourbillons, moonphase displays, exquisite enameling, diamond settings and automatic winding. Creating a skeleton watch is not easy for sure, but crafting it to perfection is even harder. Precision to a T, time, a sharp vision, and the combined skill and dexterity of multiple specialists, all these factors could make or break the perfect skeleton watch. Piaget has proven its capability to master all of the above, delivering timepieces of exceptional aesthetics and reliable functionality for more than 50 years. Which makes Piaget one of the first choice for many collectors, when it comes to skeleton watches. The Piaget Polo case has been further fine-tuned and downsized to an incredible thickness of 6.5mm, which is almost 3mm slimmer than its other models.

The Manufacture outdid themselves once again with the intricate craft seen on the new Piaget Polo Skeleton. And most importantly, the skeleton redesign did not replace the vibrant spirit of the sporty identity of Piaget Polo but rather, sprucing up the timepiece with a bold splash of elegance and an edge. The thinnest case ever seen on the model, this new offering is not just a watch, but a wearable work of art. The 42mm steel-cased sports watch measures just 6.5mm thick and is powered by Piaget’s 1200S1 self-winding manufacture movement – entirely developed and produced in-house – which is an unbelievable 2.4mm wafer thin.

For something this elaborately-produced, you may feel apprehensive about wearing it as an actual sports watch but that post no concerns. The Polo Skeleton is robust, reliable, and certainly doesn’t compromise on its signature features such as the 44 hours of power reserve and water resistance down to three atmospheres, like other models within the Polo collection. Wearers could easily interchange between three types of straps: stainless steel bracelet or leather strap in blue or black.

Additionally, for better versatility, those that like dressing their watch straps in different styles can now switch things up with other strap options apart from the classic stainless steel links, such as the additional handsome leather bands that comes with each watch. Admire every nook and cranny of the intricate clockwork mechanisms as the caseback is finished with a transparent sapphire crystal.

Two versions are up for grab, the first with a Piaget Blue PVD Finish, and the second in a stylish slate gray offering. In both versions, the case has been completely reduced to a thinness of 6.5mm, while the flip side is finished with a clear sapphire crystal caseback.

Discover the Piaget watch collections online or locate the nearest boutique for a visit. A highlight of Piaget's novelties launched during Watches & Wonders 2020. 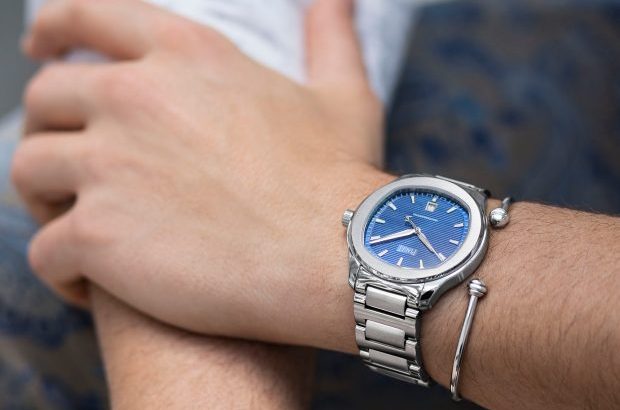