Since it was founded in 1994, the watchmaker Bell & Ross has been ever-present on the runways. Inspired by the aeronautical industry, its instrument watches are designed with fighter pilots in mind.

The pioneering watchmaker has thus also become a vital player at Formula 1 circuits™. Since 2016, Bell & Ross has been associated with the Renault F1® Team. To celebrate the arrival of the Alpine brand at this year’s Grand Prix races, the team has been renamed Alpine F1® Team. And Bell & Ross
has become its official timekeeping partner.

To celebrate this continued partnership the Franco-Swiss company has launched an Alpine F1® Team watch collection, inspired by the world of Formula 1™. This sixth family of exceptional timepieces includes three ultra-sporty chronographs.

Since it first opened its doors in 1994, the watchmaker Bell & Ross has displayed a keen passion for the world of aviation. Its watches are inspired by the cockpit instrumentation of a jet fighter. To refresh its inspiration, the company has also explored other domains, including motor racing.

In 2016, Bell & Ross entered the close-knit and high-tech world of Formula 1™ racing. It is without a doubt the most prestigious motor sport in the world.

Since then, Bell & Ross has been the official timekeeping partner of the Renault F1® Team. Every season, the pioneering watchmaker dreams up a collection of ultra-sporty RS watches. 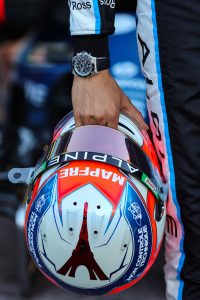 The recent arrival of Luca De Meo as General Director of the Renault Group has led to a number of strategic changes. The legendary Alpine name now represents the group in Formula 1™. Renault F1® Team has been rebranded Alpine F1® Team. And, of course, Bell & Ross has renewed its partnership. You don’t change a competitive team! The watchmaker is honoured to be associated with Alpine, a prestigious name in the world of motor sport. These two “teammates” are united by a shared passion for precision mechanics, innovation, and speed.

A Partnership That Makes Sense

There are a number of major similarities between the worlds of aviation and Formula 1™. The engineers working in both domains are constantly in search of the ultimate mechanical performance. In particular, their common aim is to develop a machine that is as light as possible while retaining a very high level of resistance.

The timepieces designed by Bell & Ross, and especially those in the Alpine F1® Team collection, incorporate the best of both these worlds. Partners at the racing circuits, the watchmaker and the racing car constructor are similar in many ways. Since the very outset, the watchmaker has designed ultra-sporty timepieces while Alpine has produced racing cars – a symbol of elegance, agility and sporting prowess. The iconic berlinette A110 coupé, born in 1962, won the world rally championship in 1973 as well as numerous other races.

The two partners also retain a certain artisanal dimension. Like the Alpine racing cars, the watchmaker’s exceptional timepieces are, for the most part, assembled by hand. Finally, the mountains are another point in common between the two companies. The workshops where the innovative Bell & Ross models are made are surrounded by Swiss mountain landscapes while the Alpine name was chosen by its founder, Jean Rédélé, in memory of his numerous successes on the roads in the Alps.

For 2021, Bell & Ross has developed an initial collection of watches inspired by the graphic charter of the Alpine team. Under the name Alpine F1® Team, this series comprises three sporty and sophisticated avant-garde timepieces. The stopwatch function has been inextricably linked with motor sports since time immemorial. It serves to measure short periods of time and thus the speed of racing cars.

Stylish, functional and easy to read, these three watches reiterate all the Bell & Ross know-how in the field of professional watchmaking. They are called the A521, in reference to the current Alpine A521 single-seater. Relatively similar, the dials of these sporty timepieces reflect the visual identity of Alpine, in particular the constructor’s basic colour code of blue, black and white. They also call on cutting-edge materials tested on Formula 1 cars.

These exceptional watches will be worn throughout the 2021 season by the staff of the Alpine F1® Team. 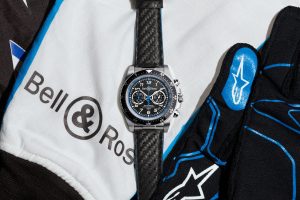 The BR V3-94 A521 is available in conventional steel or perforated leather, hatched on the upper side and reminiscent of carbon fibre.

This is the simple and effective instrument watch par excellence. Its round steel case with a diameter of 43 mm is drawn from the Vintage collection.

The dial includes 12 numbers painted in white, which contrast with the surrounding black to ensure optimum legibility. The typeface in italics conveys and idea of speed and momentum. The two stopwatch counters are configured as stars and white circles, calling to mind the racing car’s wheel rims. They also offer a glimpse of the watch mechanism. The counterweight of the central second hand of the stopwatch takes up the stylised “A” of Alpine. A mini red, white and blue flag at 6 o’clock recalls the French origins of Alpine. The duotone speedometer function allows the owner to calculate the speed of a racing car. Used in conjunction with the stopwatch, the two-way rotating bezel marks the time in even greater detail.

Two straps are available: conventional steel or perforated leather, hatched on the upper side and reminiscent of carbon fibre.

This classic timepiece is available in a limited series of 500. 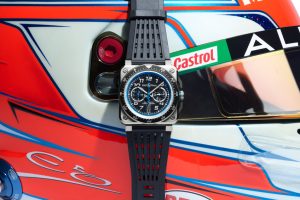 This is the iconic Bell & Ross case, the “circle in a square” introduced on the BR-01. It is available here in steel, in the 42 mm BR-03 format.

The dial is similar to that of the BR V3-94, only with the date moved to 6 o’clock. It incorporates subtle touches of “Alpine blue”, in particular on the two hands of the stopwatch. The two-way rotating bezel offers a countdown from 60 to 0 minutes – very handy at the start of a race. The toggle push-buttons with black PVD finish are reminiscent of the paddles to be found on the steering wheels of racing cars.

This timepiece is a limited edition of 500 pieces. 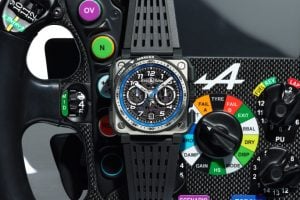 The BR-X1 A521 skeleton timepiece is a limited edition of 50 pieces.

This is the most sophisticated model in the collection.

Its multi-material case combines grade-5 titanium, ceramic and rubber. The toggle push-buttons are made from titanium covered in rubber for better grip. Their ergonomic design recalls the paddles on the steering wheel of a Formula 1™ racing car. A rubber shell surrounds the case to protect it against impacts. Great attention has been paid to the skeleton dial. The glazed base offers a view of the spectacular skeleton mechanism, including the symbolic X-shaped central bridge and the moving balance spring. The bezel is divided into a fixed, graduated section made from titanium and the rotating aluminium ring, covered with black PVD which allows the wearer to mark the time.

This skeleton timepiece is a limited edition of 50 pieces. 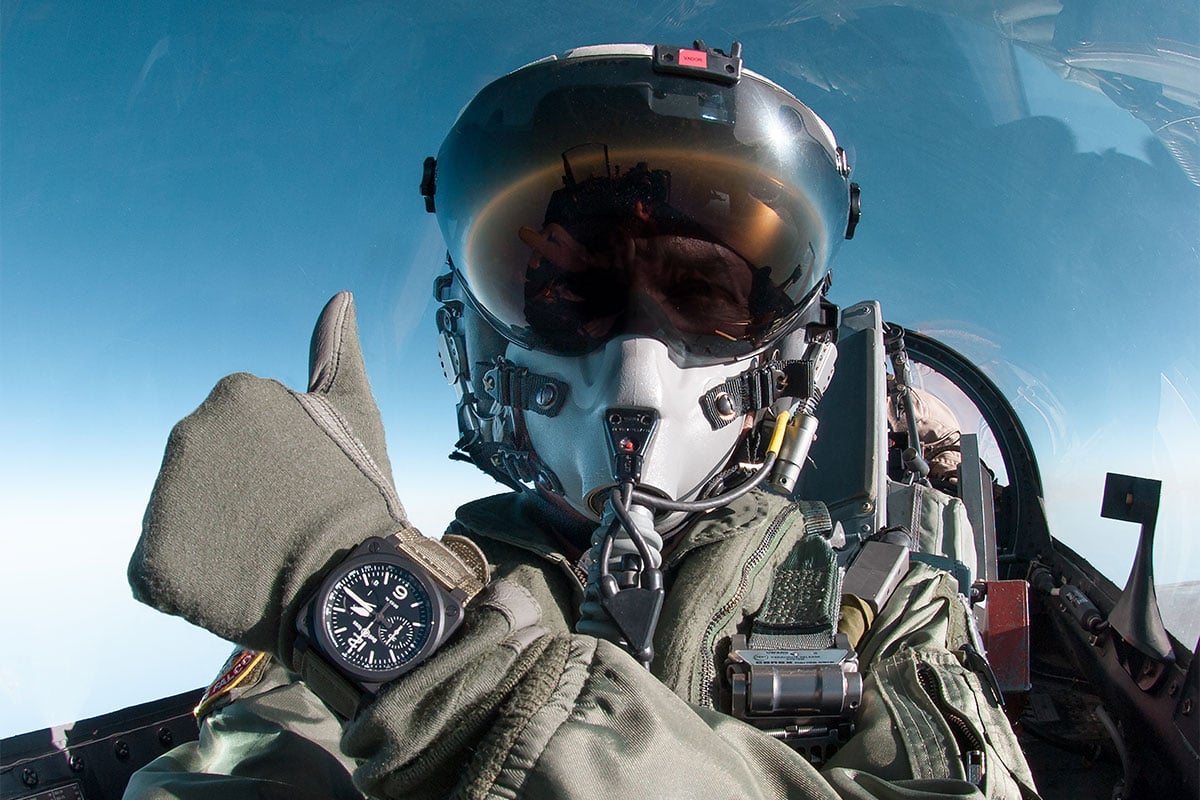