On 7 Messidor Year IX – in other words, June 26, 1801 – master watchmaker Abraham-Louis Breguet patented a new kind of regulator: the tourbillon. Five years later, in 1806, the public turned out in large numbers to attend the National Exhibition of Industrial Products in Paris, where visitors were able to marvel at this incredible invention. As the custodian of one of the greatest creations in watchmaking history, House of Breguet invites fans, enthusiasts, and collectors to celebrate Tourbillon Day on June 26th. On this day, Breguet boutiques across the globe offer visitors the chance to discover its collections and learn more about this unique complication.

The Origins of the Tourbillon 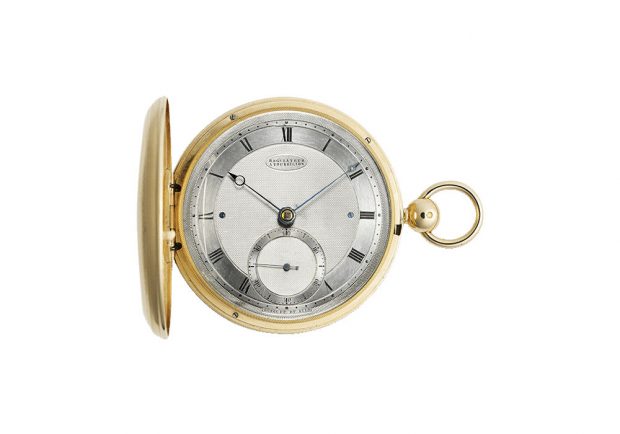 Abraham-Louis Breguet only sold 35 tourbillon watches in his lifetime. This confidential figure in itself hints at the extreme complexity involved in producing this unique mechanism. While patented in 1801, its development took no less than 10 years of experimentation and research in the years spanning from 1795 to 1805. At a time when timepieces were worn vertically in the waistcoat pocket, the master watchmaker devised a way of negating the effects of the earth’s attraction on the functioning of the oscillator and, on the basis of this, improving the chronometric accuracy of the movement. Then the idea came to him to incorporate the balance wheel and spring as well as the escapement (lever and escape wheel) in a mobile casing rotating on itself. Abraham-Louis Breguet devised the name tourbillon for this double rotation of the cage and its parts in reference to the long-forgotten notion of a planetary system.

Fantastic in its design, captivating in its function, this invention has never ceased to command respect, right from when it was first presented to the current day. Because while it has remained true to its purpose, the tourbillon has flourished with the emergence of new technologies. 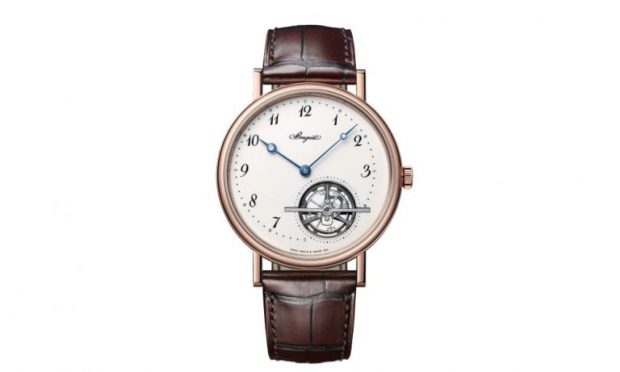 The Classique Tourbillon Extra-Plat Automatique 5367 illustrates this point to perfection: this piece bears the hallmarks of Breguet’s cherished design characteristics, such as the grand feu enamel dial, an off-center hours chapter with Arabic numerals, and blued hands – similar in appearance to the Master’s trademark pocket watches. 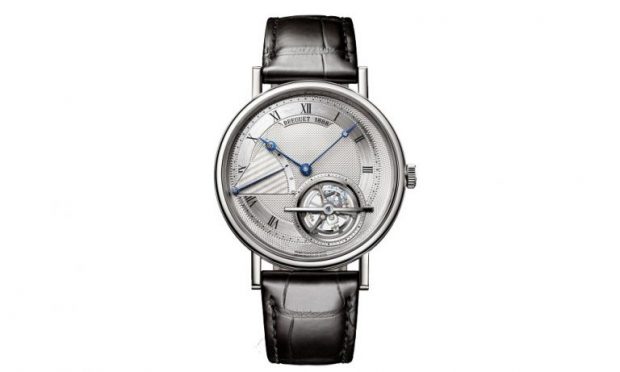 The gold engine-turned dial on the Classique Tourbillon Extra-Plat Automatique 5377 watch boldly plays with asymmetry to create a subtle and fascinating whole.

Both models contain one of the finest self-winding tourbillon movements in the world, with a thickness of just three millimeters. A figure that ties in perfectly with the 41 millimeter diameter of the rose-gold or platinum case, with a maximum 7 millimeter thickness for the engine-turned gold dial version and 7.45 millimeters for the enamel model. The thinness does not impede the decoration of the movement, with the bridge and barrel intricately engraved by hand. Its bi-directional platinum rotor is located on the periphery of the caliber and is also engine-turned by hand at Breguet.

The movement’s finesse is achieved by recreating each of the main components. A feat also made possible through the use of special materials. The tourbillon’s entire architecture has been redesigned. The cage is driven from the side and not by a pinion, which has been removed. Originally devised by Abraham-Louis Breguet, this special solution does require an additional wheel to engage directly with the exterior of the cage, but is thinner as a result. The House of Breguet has also opted for an escapement angled at 90° and a wheel with 20 teeth, this device is produced by no other manufacturer and enables the train to operate at a high frequency. The saving of weight thanks to the use of titanium in the mobile casing and silicon for the spiral and escape wheel enables a frequency of 4 hertz – an exceptional figure for a tourbillon and one that ensures remarkable chronometry.

Extra-Thin Tourbillon Paired with the Equation of Time

Ultra-lightweight – the cage weighs no more than 0.290 grams in total – and is equipped with an outstanding 80-hour power reserve, this latest-generation 581 caliber is not an end in itself. A true masterpiece of miniaturization and a tribute to Abraham-Louis Breguet, who worked tirelessly to achieve the same level of thinness, it also formed the basis for the unique interpretation of a second complication: the equation of time. This shows the difference between mean time – civil hours and minutes – and true solar time – solar hours and minutes. 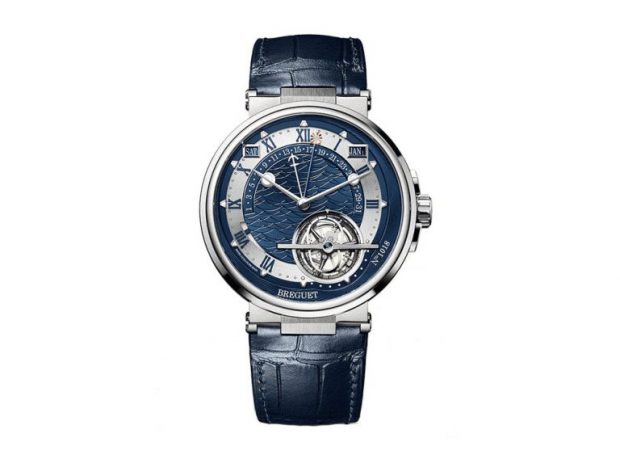 The Marine Tourbillon Equation Marchante 5887 model houses the same extra-thin tourbillon, onto which the watchmakers grafted the kidney-shaped equation of time cam, mounted on a sapphire disk. This structure uses the tourbillon’s minute rotation to control the rotation of the cam over the course of one year. A feeler-spindle sends this information to a running solar hand that is separate from the minute hand.

Alongside its running equation of time, the complexity of this grand complication is enhanced by a perpetual calendar.

Lightness and Transparency of the Skeleton Tourbillon

In 2019, for its new Classique Tourbillon Extra-Plat Squelette 5395, Breguet opted for an extra-thin 581 caliber three-millimeter skeleton for this tourbillon movement. An undertaking that is as much technical as it is artistic, with an emphasis on craftsmanship. The House of Breguet has removed almost 50 per cent of the material from this movement, without compromising on anything. 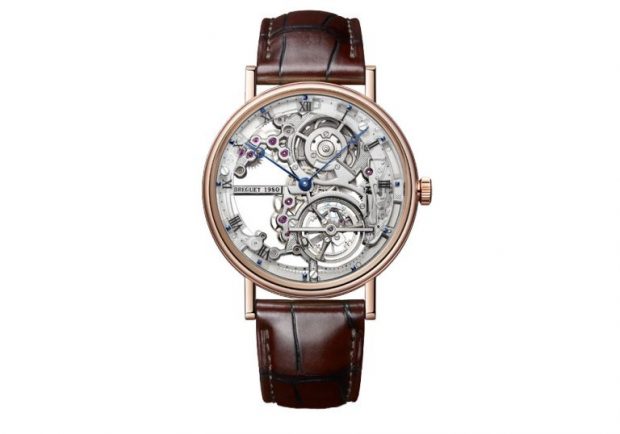 The skeleton design, with an 18-karat gold caliber that literally plays with the limits of what is possible, recalls in passing that watchmakers at Breguet practice true craftsmanship. For this model in particular, Breguet chose to make the movement plate and bridges out of an 18-carat gold alloy. Despite its complexity in the manufacturing and assembly process, gold offers many technical advantages as it is hardenable, thus more resistant for a skeleton movement, extremely durable and perfectly suited for manual finishing. Hand-crafted engraving, engine-turning, and anglage add to this to create something truly outstanding.

Classic Or Avant-garde, Over The Centuries The Tourbillon Has Developed In Line With Scientific Progress. Above All, It Has Benefited From The Passion And Mastery Of The House Of Breguet, Which Today Perpetuates An Ancestral Invention With An Exciting And Evolving Future.

Discover The Range Of Tourbillon Watches From Breguet At Our Boutiques Today. 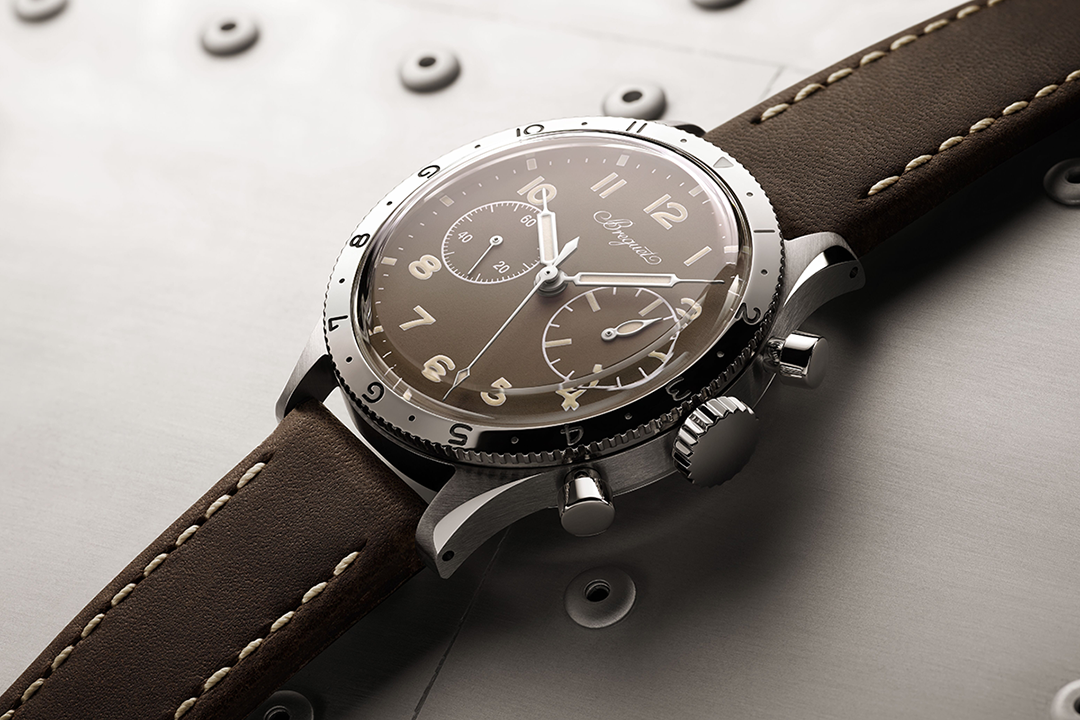