On the occasion of the Chinese New Year, Breguet is celebrating the Year of the Tiger with an eight-piece limited edition. The dial of this watch from the Classique collection showcases the in-house guilloché and engraving expertise. The result is a timepiece adorned with a Tiger whose beauty is equalled only by its strength.

A symbol of bravery, intelligence as well as energy, the Tiger is considered a sacred animal in China, and has been since antiquity. Its ferocity is feared as much as it is admired. These are all inspiring qualities for the Breguet brand, which is unveiling an interpretation of this great feline with its confident gait and gaze. To craft this watch from the Classique collection, the Manufacture’s artisans have combined the art of guilloché with that of engraving. 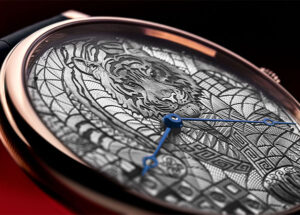 Using a play on perspectives, the dial motif is created in three stages. Firstly, the work begins with engraving the separation contours, part of the decoration and the Tiger on the gold using the bas relief technique, which consists of carving motifs in extremely small dimensions. These sculpted sections then need to be coloured in black to provide the desired depth and contrast. Finally, the rest of the motif is created using guilloché work. This artisanal method, which requires great dexterity, consists of working with a burin on the areas to be hollowed out according to an extremely precise motif. A week’s work is required to craft each dial. The result is a design in relief on which the great cat is depicted as approaching.

The watch face also features the distinctive characteristics of the House, such as the engraved logo between 7 and 8 o’clock and the blued steel open-tipped Breguet hands that accompany the hours and minutes. The chapter ring is punctuated by discreet round gold hour-markers and the 40 mm case is crafted in 18-carat rose gold. The Classique 7145 model combines traditional Haute Horlogerie refinement and aesthetic elegance. At its heart beats the hand-decorated ultra-thin self-winding 502.3 calibre. Developed in the 1960s, it remains one of the thinnest self-winding movements in production at just 2.4 mm – a modest thickness made possible by the design featuring an open worked barrel and an off-centred oscillating weight. This unusual design makes it possible to perceive the mainspring which would otherwise be hidden. The movement is equipped with an inverted straight-line lever escapement with silicon horns and balance spring.

This 162-component movement beats at a frequency of 3 Hz and has a 45-hour power reserve. The sapphire crystal caseback reveals the gold oscillating weight, which is hand-guilloché with a circular barleycorn pattern.

This timepiece, produced in an eight-piece limited series numbered from 1/8 to 8/8, is fitted with an alligator leather strap secured by a pink gold pin buckle.

Artistic Crafts According to Breguet

At Breguet, artistic crafts are not merely a means of enhancing watchmaking mechanics. They are part of the DNA of the House, which has since 1775 consistently devoted equal importance to aesthetics, technique and innovation on the same level. Engraving, for example, has survived through the ages to become one of its defining features. The highly experienced engraving artisans have acquired the ability to respect an “artistic grammar” specific to the manufacture, while preserving their distinctive aesthetic vocabulary. Whereas line engraving (volute or scroll motifs) accounts for most of the work produced, other techniques such as relief and intaglio engraving are also part of Breguet’s expertise. As too is the hand-engraving of letters and numbers on the back of watches, a detail that remain extremely rare within the watch industry. 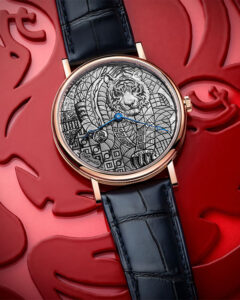 Guilloché work (also known as hand-engraving on a rose engine) is a heritage that Breguet has done more than merely preserve: some 30 guilloché lathes have been rebuilt within the Manufacture itself. While similar to the antique machines, they are endowed with the latest ergonomic, lighting, optical and precision equipment. The workshop thus equipped is one of the most important in the entire watchmaking industry and its artisans are capable of executing a wide variety of geometric patterns. With a view to perpetual renewal, a research and creative department, notably responsible for developing new motifs, has been specially dedicated to this art form. 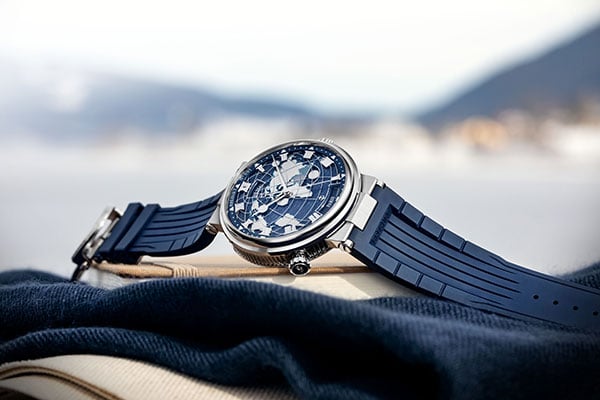