As Valentine’s Day approaches, Breguet has attired the Reine de Naples in celestial poetry. The white mother-of-pearl dial was specially chosen for its appearance featuring fluffy “clouds” that appear to float between the moon-phase display and the hours, minutes and seconds subdials. This model is issued in a 28-piece limited edition.

An emblem of feminine watchmaking, the Reine de Naples collection draws its inspiration from the first wristwatch in history, delivered in 1812 to Napoleon’s sister, the elegant Caroline Murat, Queen of Naples. Today, this timepiece that originally featured an oblong shape and has now turned oval, is an undisputedly iconic women’s watch. Each model in the contemporary collection, whether gemset, beaded or lacquered, is an ode to femininity. This new interpretation from Breguet is no exception to the rule. Issued on the occasion of Valentine’s Day, this timepiece exudes an appealing allure graced with subtle romantic references. 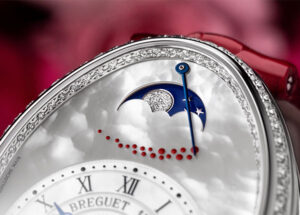 The dial is adorned with an airy sky whose white mother-of-pearl shimmer is sprinkled with “clouds”. At 12 o’clock, the trail of love appears in red to indicate the 45-hour power reserve. As if suspended from the clouds, the finely hammered moon-phase display is composed of white gold. Located in the lower part of the dial, the chapter ring is set with hand-guilloché natural white mother- of-pearl, as is the centre of the small seconds display. The Breguet open-tipped blued steel hands indicate the hours and minutes. Each second is priceless in the realm of love, which is why they are marked by a red-lacquered double heart. To complete these poetic touches, the white gold bezel and case flange are sprinkled with a sparkling shower of 128 diamonds. A symbol of passionate love, red also appears on the crown, which is set with a ruby. This white gold timepiece elegantly plays with the immaculate contrasts of the sky and the touches of garnet, expressing the fire of love. To finish off in style, its blazing red alligator leather strap is fitted with a white gold triple- blade folding clasp set with 28 diamonds. 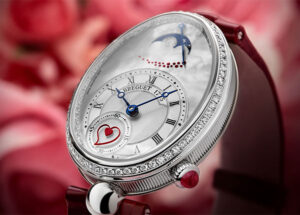 Abraham-Louis Breguet set himself the high standards of offering watches combining aesthetics with high-level precision. This value remains a priority for the manufacture to this day, as demonstrated once again by this new creation. The movement at the heart of the new Reine de Naples 8905 is self-winding. It is equipped with a straight-line Swiss lever escapement and a silicon hairspring. The 269-component movement beats at a frequency of 3.5 Hz while its platinum oscillating weight is entirely hand-guilloché and can be admired through the sapphire caseback, as can the movement finely decorated in keeping with the noblest principles of Haute Horlogerie. Finally, this elegant timepiece is water-resistant to 3 bar (30 metres).

A Watch Fit for A Queen

During her reign in Naples, Caroline Murat, Napoleon Bonaparte’s younger sister, was a great supporter of the arts and acquired over 30 Breguet watches and clocks. In 1810, the watchmaker based on the Quai de l’Horloge in Paris began a new creation for the Queen of Naples: a watch that could be worn on the wrist. It was the first wristwatch specifically designed for this purpose. From its delivery in 1812 to its repair in 1849 and 1855, the Breguet archives trace the history and characteristics of this watch that has now vanished. This extremely refined oblong watch with its silver guilloché dial featured several complications: a minute repeater, a moon phase and also a thermometer. Finally, a strap made of hair finely woven with gold thread allowed it to be worn around the wrist.