Design is the fundamental element when it comes to watchmaking at Cartier. The French jeweller-watchmaker has successfully created a unique collection of iconic watches, built upon several historical timepieces, all bearing the brand’s signature design codes. Throughout the years, the notion of “looking back in order to move forward” has been a source of creativity for Cartier’s watchmaking department. Though ever-evolving, Cartier’s watch designs seldom stray from the brand’s distinct graphic identity and aesthetic codes.

At Watches & Wonders 2022, Cartier revisited three of its watchmaking icons – the Tank, the Santos and the Pasha. While remaining as faithful as possible to the earliest versions, Cartier’s creative team worked hard to make them more arresting and reflective of the times. 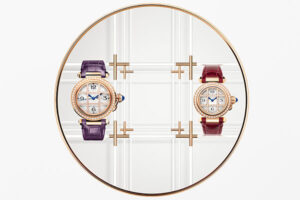 Born in 1985 and designed by the legendary Gerald Genta, Pasha de Cartier was inspired by a round and water-resistant watch supposedly created for the Pasha of Marrakesh in the early 1940s. Characterising features include its round water-resistant case, sword-shaped hands, broad bezel, four oversized Arabic numerals, and a screw-down crown cap attached by a tiny chain to the case. Another evident detail would be its protective grille, originally made to protect the dial from trauma, in addition to being a decorative element.

Unlike the design language used by Cartier icons created in the earlier part of the 20th century, the Pasha presented a more robust presence on the wrist and made a statement with its bold lines – true to the exuberant spirit of the 1980s. It catered to a very different audience than those who were more familiar with the quiet elegance exuded by models such as the Tank. It also opened a new chapter for Cartier and soon amassed a considerable following. 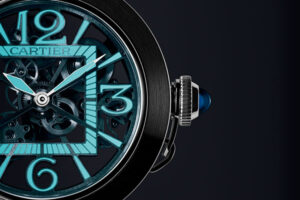 At Watches & Wonders 2022, the Pasha de Cartier was given several updates. Firstly, Cartier redesigned the unmistakable grille protector. Previously only removable with a specialised tool, one can now dislodge it simply with a push and turn, thanks to a new spring mechanism hidden under the periphery of the bezel. Fans who prefer something more fun and whimsical can also now personalise your Pasha by attaching charms to its signature crown cover.

If you’re looking beyond the classic three-hand model, Cartier has also introduced three new complicated models to the Pasha family this year – the moonphase, skeleton and flying tourbillon. The new moonphase design features blue Arabic numerals and a planisphere at 6 o’clock, while the flying tourbillon model is powered by the 9552 MC Flying Tourbillon calibre developed in-house by Cartier.

The skeleton model, on the other hand, is orchestrated by Cartier‘s signature Calibre 9624 MC, a skeleton movement designed from scratch. Interestingly, the generous use of SuperLuminova – coating all the bridges and hands, makes it a sight to behold when viewed in the dark. Very few wristwatches come close to being as iconic as the Cartier Tank. Created in 1917 and inspired by the tanks of World War I, the brainchild of Louis Cartier looks nothing like a rugged combat vehicle. Yet the pure design of the Tank watch, made out of nothing much more than a pair of parallel brancards and a sleek rectangular case, remains as relevant as ever in the 21st century.

A century and many reiterations later, the Tank series has attained cult status. And one of its lesser-known versions, the Tank Chinoise, celebrates its 100th birthday this year with an update in the form of the Cartier Privé Tank Chinoise. Initially inspired by Oriental porticos, the first Tank Chinoise featured a squarish case with overlapping brancards. The 2022 version stays true to the initial design to a certain extent – the case still features overlapping parallel bars, but has been redesigned to feature a rectangular case.

Cartier also added texture and dimension to the case using both brushed and mirror finishing on the vertical and horizontal bars. Presented in yellow gold, rose gold and platinum models (150 pieces each), powered by the hand-wound calibre 430 MC. 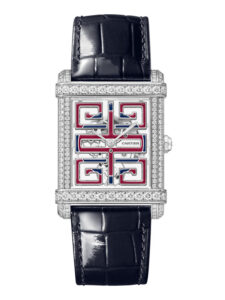 Cartier also went beyond the classical-looking Tank Chinoise by launching the Cartier Privé Tank Chinoise Skeleton, featuring a redesigned version of its well-known 9627 MC hand-wound skeleton movement, with its base plate and bridges shaped like a motif commonly seen on traditional Chinese windows and textiles. For the first time, Cartier has also decorated the base plate and bridges of a watch movement with coloured lacquer, as seen on this new Tank Chinoise Skeleton. Bold, slightly radical, yet still speaking the Cartier design language, it is interesting to see how Cartier has revived a century-old timepiece for another generation. 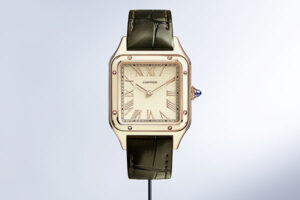 Directly inspired by a wristwatch created in 1904 for the impeccably dressed aviation pioneer and Louis Cartier’s dear friend Alberto Santos-Dumont, the Santos de Cartier is a handsome testament to how timeless designs can transcend eras. It was also one of the first wristwatches ever created. 118 years later,  nothing about the design has changed drastically, but this iconic timepiece remains evergreen and much sought after by collectors.

The elegant Santos-Dumont collection gets three new additions this year. Presented in steel, gold and platinum versions, these new models feature cases and bezels coated with translucent coloured lacquer – a first for the Santos line. Lacquer is applied to the usual Santos-Dumont case and bezel that have been pre-engraved with recesses. It is subsequently polished by hand after the lacquer has dried.

Staying true to Cartier’s design codes while giving a fresh spin on vintage-inspired timepieces, these eye-catching variations also feature a concentric cube pattern on the dial. Housed in the case, is Cartier’s manufacture 430 MC manual winding-movement with 38 hours power reserve. 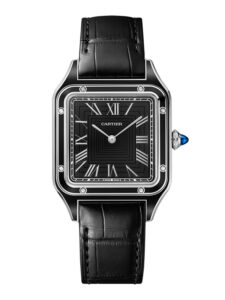 Discover the Cartier collections online or visit us at our boutiques at your nearest locations.