A chronograph is a time-telling instrument such as a pocket watch or wristwatch equipped with a mechanism that can measure short intervals of time on demand.

The chronograph seconds hand that is manually activated, stopped and reset is typically used to indicate the elapsed time. Control of the start, stop and return to zero are the three basic functions of a chronograph.

Chronographs generally have a central chronograph sweep seconds hand and may also feature a chronograph minute hand and/or a chronograph hour hand. The start and stop functions are typically controlled by a pusher located at the 2 o’clock position while the pusher for resetting the chronograph is at 4 o’clock.

The term “chronograph” is derived from the Greek words “chronos” and “graphein” which mean “time” and “write” respectively. The term literally arose because of the “time-writing” device invented by Parisian Nicolas Mathieu Rieussec (1781 to 1866) because it made use of ink deposited onto a rotating enamel dial to measure elapsed time.

In 2013, a re-discovered timekeeping artefact made by Louis Moinet (1768 to 1853) was revealed to the watchmaking world and it led to a total “reset” of what was previously known in chronograph history.

Known as the compteur de tierces or “counter of thirds” and completed in 1816, it is able to measure elapsed time up to one-sixtieth of a second, a feat totally unthinkable as the generally accepted limit of time measurement then was to one-tenth of a second. The movement has a frequency of 216,000 vibrations per hour or at an amazing 30 Hertz!

It would take around a century before Heuer (today known as TAG Heuer) broke this high frequency record with its Carrera Micrograph 100th Anniversary Edition that measures elapsed time up to one-hundredth of a second with its frequency of 360,000 vibrations per hour. 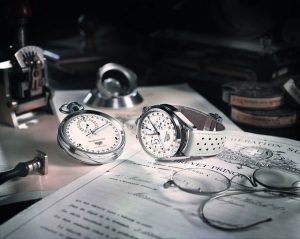 What was even more mind-boggling is the compteur de tierces’ return-to-zero function. With this ingenious invention, Les Ateliers Louis Moinet staked its claim that the company’s namesake Louis Moinet is the inventor of the chronograph, reasoning that it qualifies as a chronograph because of the start, stop and reset functions of its central chronograph hand.