Passion is the fusion of unlimited potential and undivided focus. Dilraba, a multi award-winning Chinese actress, has upheld such enthusiasm by portraying many iconic characters, with millions of viewers following her growth and achievements over the years. Her passions extend from being a performer, to having great involvement in various charity projects. Elegant while firm, confident and noble, Dilraba’s characteristics align with Panerai’s standards of a female role model.

In her words, “Staying true to the brand’s values while continuously overcoming limits and pursuing innovation, Panerai’s motto is deeply rooted in my heart. With bold creativity and exquisite craftsmanship, the brand continuously explores the unknown. I admire its courage and enthusiasm and it is my honor to become the Global Brand Ambassador. With Panerai, I look forward to becoming a believer and also an explorer in fine watchmaking.”

Jean-Marc Pontroué, CEO of Panerai, is confident in Dilraba as the brand’s first ever female ambassador. “As a bold and confident individual, her spirit is in line with Panerai’s brand philosophy. She represents China’s contemporary women who are bold and forward-thinking. We warmly welcome her and look forward to exploring the future with her.” Her first on-screen appearance in 2013 portraying a strong-minded and optimistic heroine in the TV series “Annaerhan” led her to perform several iconic roles. Her best-known TV series include “You Are My Glory”, “Diamond Lover”, “Sansheng Sanshi Pillow”, and “Chang Ge Xing”. Often praised for her outstanding performance, Dilraba has also taken on roles in numerous films, namely “Miracles of the Namiya General Store” and “Fall in Love Like a Star”. She continuously challenges herself and her limits in all her passion projects, demonstrating unlimited potential. With her, Panerai is looking forward to embarking on an exciting new journey.

From the Panerai Luminor Due Collection

Dilraba’s own lifestyle is a versatile one, bringing her from an action-packed film scene to the red carpet in a matter of hours. For this reason, she is perfectly paired with the Panerai Piccolo Due – 38mm (PAM01273 / PAM01123), Panerai’s first collection expressly for women.

The PAM01273 comes with a 38mm case and a shiny, polished alligator strap. Additionally, it has a dazzling deep blue palette evoking the furthest reaches of the sea. It is also reimagined with a slim profile that is fresh, stylish, and, just like the actresses’ own lifestyle, equally suited to formal dressing, active pursuits, and every occasion in-between. The PAM01123 effortlessly presents the urbane, Italian sophistication that fits decidedly within the dress watch category. The watch features a steel bracelet, each link bears the iconic profile of Panerai’s Safety Lock crown protection device in gracefully curved relief, further highlighted by applying alternating polished and brushed finishes. This latest entry achieves a deft balance between solidity and lightness, elegance and strength –the same features that Dilraba herself conveys. 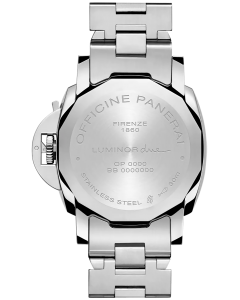 Founded in Florence in 1860 as a workshop, shop and subsequently school of watch-making, for many decades Panerai supplied the Italian Navy and its specialist diving corps in particular with precision instruments.

The designs developed by Panerai in that time, including the Luminor and Radiomir, were covered by the Military Secrets Act for many years and were launched on the international market only after the brand was acquired by the Richemont Group in 1997.

Today Panerai develops and crafts its movements and watches at its Neuchâtel manufacture. The latter are a seamless melding of Italian design flair and history with Swiss horological expertise.

Locate our nearest boutique now to discover more of the Panerai Collections.