This year, Cortina Watch celebrates its longest standing relationship with the last family-owned Genevan watch manufacturer – Patek Philippe – with a limited-edition wristwatch and a unique Dome Table Clock for this Golden Jubilee.

Since Cortina Watch’s founding in 1972, it has represented one of the most respected brands in Swiss watchmaking – Patek Philippe. What began as a professional encounter between the founder of Cortina Watch, Mr. Anthony Lim, and the late Mr. Henri Stern over 66 years ago developed into a longstanding retail partnership that has helped to establish both brands across the Southeast and East Asia region. Today, Cortina Watch exclusively manages six Patek Philippe specialist boutiques across Asia.

To commemorate the 50th anniversary of Cortina Watch’s founding as well as five decades of partnership with Patek Philippe in the region, a special limited-edition watch has been created for the occasion. The Patek Philippe Ref. 5057G-010 is a new edition of the Ref. 5057R-001 created for Cortina Watch in 1997 to celebrate its 25th anniversary. Limited to 100 pieces, it will be available this year. 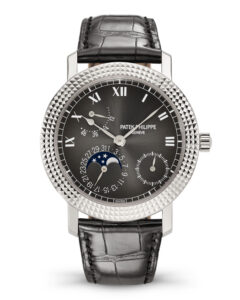 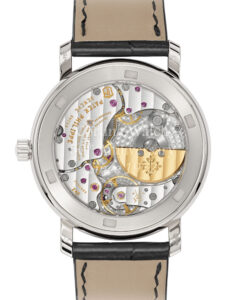 Powered by the Caliber 240 PS IRM C LU, the display indicates the date, moon phases and power reserve on two subdials, with a small seconds indication between the four and five o’clock hour markers. The ultra-thin, self-winding movement has a 48-hour power reserve and can be viewed through the transparent sapphire caseback, which bears a commemorative inscription “Cortina Watch 50th Anniversary Since 1972” in white. 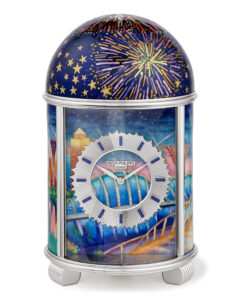 Patek Philippe has also created a unique dome clock in Grand Feu cloisonné enamel for the 50th anniversary celebration of Cortina Watch. The Ref. 20145M-001 “Singapore Skyline” celebrates Singapore’s beautiful urban landscape, from the Merlion mascot to the Central Business District, Gardens by the Bay, the Esplanade, and Marina Bay Sands, where the second Patek Philippe boutique was opened in Singapore by Cortina Watch. 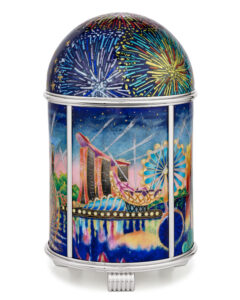 To create the contours of the city skyline and its most emblematic monuments, the enameller used 9.2 m of 24K gold wire (18.45 g) measuring 0.2 x 0.6 mm in cross-section, cut into tiny segments, and shaped by hand.

For the scene’s magical tints, with their subtle gradations and layered effects, a palette of 50 enamel colors was used: 47 transparent, 1 opaque and 2 opalescent. Each enameled plate required from 10 to 14 firings at temperatures between 890º and 910º C.  A shower of 50 gold stars and fireworks, made using gold and silver dust, cascade the sky to celebrate the jubilee. A guilloched hour circle with dentate edges echoing the flowers in the garden city, set with 12 baguette markers made of lapis lazuli (2.27ct), frames a dial center in cloisonné enamel. An engraved inscription “Cortina Watch – 50th Anniversary – Since 1972” is discreetly indicated on the clock. The dome table clock is powered by the Caliber 17’’’ PEND mechanical movement rewound by an electric motor. The affinity between Patek Philippe and Cortina Watch extends beyond their retail partnership. It is an inter-generational friendship between the Stern family, who own Patek Philippe, and the family of Mr Anthony Lim, who are the custodians of Cortina Watch. Says Jeremy Lim, CEO of Cortina Watch, “Patek Philippe and Cortina Watch share an intertwined relationship in Asia, from the establishment of the Patek Philippe boutiques across Southeast and East Asia, to our shared passion for fine watchmaking and craftsmanship. Not only have I personally experienced this through the generous friendship of Mr. Thierry Stern and Mr. Philippe Stern, so have many of our clients who have had the privilege of visiting the manufacture. We have retained the aesthetic codes of the 25th anniversary Calatrava, launched in 1997, for the 50th anniversary limited edition. This is in homage to the past and present leaders of both companies who have nurtured our longstanding partnership. I hope that it will continue to strengthen over the next 50 years, and with the next generations after us.”

“The friendship between my grandfather, father and Mr. Anthony Lim started over 66 years ago and it still stands strong today, much like the relationship between Patek Philippe & Cortina Watch. This is a unique and precious relationship that truly transcends generations, and I am proud to be part of this very special celebration and to present the Ref. 20145M-001 “Singapore Skyline” Dome Table Clock to Mr. Anthony Lim on behalf of my father. We look forward to another 50 years of great partnership and for our next generations to keep this friendship going”, says Mr. Thierry Stern, President of Patek Philippe.

“This strong and unwavering partnership forged between Patek Philippe and Cortina Watch 50 years ago is the perfect embodiment of what Patek Philippe represents. Cortina Watch is a long trusted and very important partner for Patek Philippe in the Southeast Asia region that truly understands the values of Patek Philippe and have nurtured strong relationships over generations of local clients. We look forward to working together as we continue to grow alongside and support each other,” says Deepa Chatrath, General Manager of Geneva Master Time Marketing.

To celebrate this longstanding partnership that spans 50 years and transcends generations, Cortina Watch and Patek Philippe will co-host an exhibition that showcases their affiliation. The exhibition will present the limited edition Ref. 5057G-010 and Ref. 20145M-001 “Singapore Skyline” dome table clock, together with the Ref. 5057R-001 25th anniversary model. It will also include Cortina Watch’s collection of several other unique Patek Philippe creations, such as Ref. 1677M “Esplanade”, created for Singapore’s Golden Jubilee in 2015; Ref. 20094M-001 “Bay of Singapore”, created for the Patek Philippe Watch Art Grand Exhibition, hosted in Singapore in 2019; Ref. 20040M-001 “Twilight Taipei”, created to commemorate the first Patek Philippe boutique established in the city’s most prominent skyscraper.

The travelling exhibition will be held at Patek Philippe boutiques across the region, starting with ION Orchard and Marina Bay Sands in Singapore.  It will travel to Taiwan, Thailand and Malaysia before finally returning to Singapore towards the end of the year. 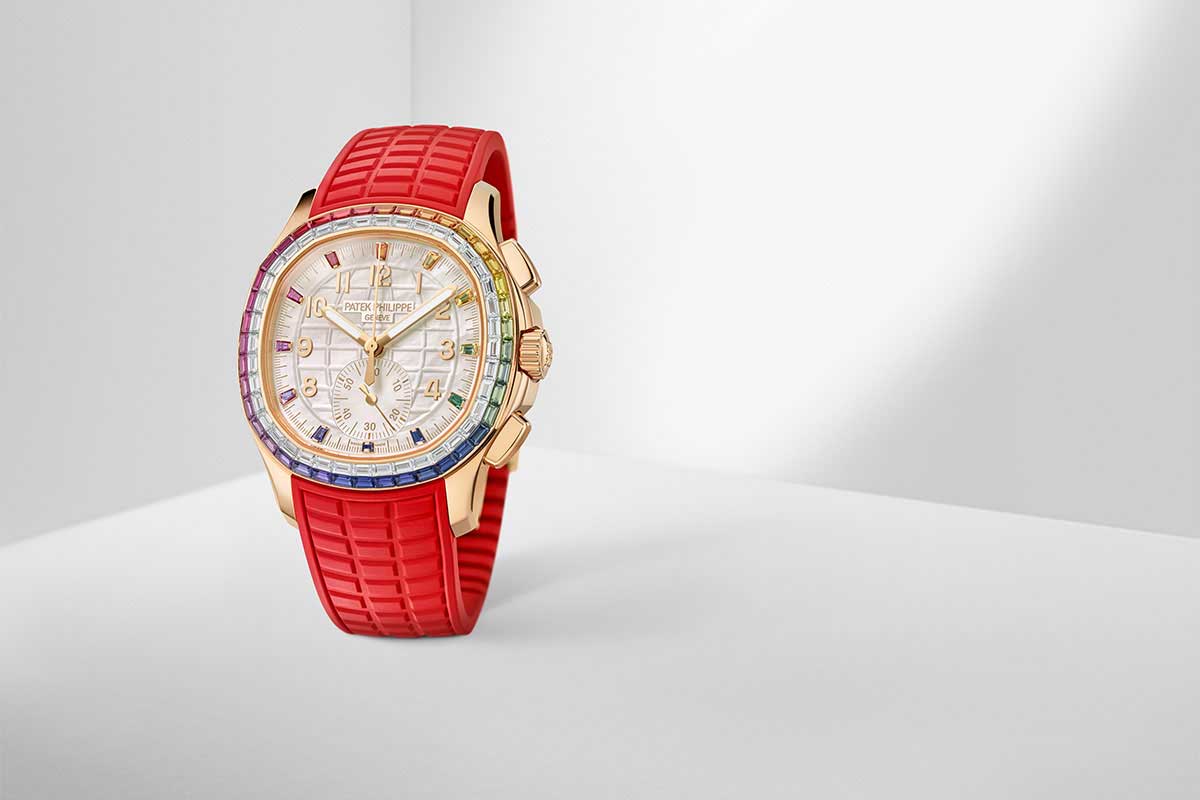 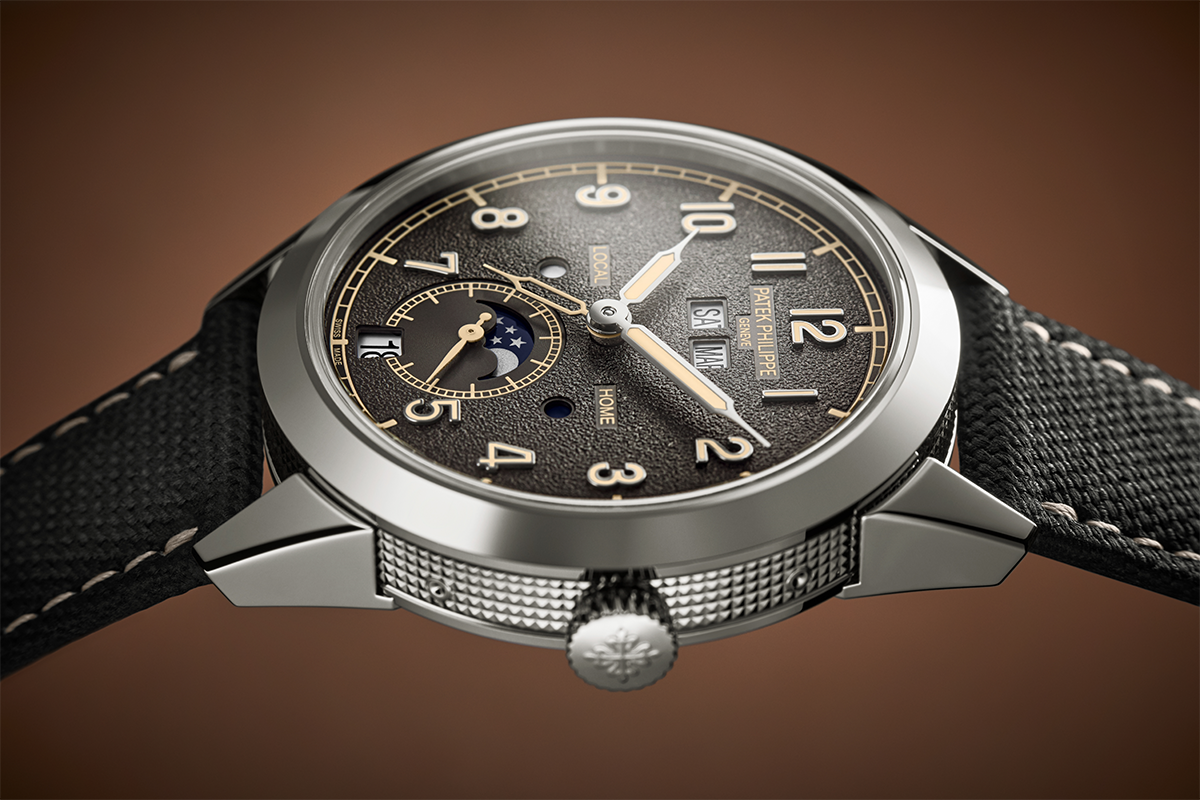