The presence of a watch is set by the dial, and how it has evolved reveals plenty about our own obsession with craftsmanship, technology and ingenuity.

If the movement represents the heartbeat of a watch, then the dial of the watch is unquestionably the face. Much like our own facial features that endow us with looks distinctive of one another, every element from the finish to the colour that appears on the dial lends an elegance unique to the watch. It is this aspect that influences how prospective clients feel about the watch – does it resonate with them? Bearing that in mind, watchmakers have unremittingly explored a plethora of techniques, enmeshed with any material that can be safely transformed and embellished on this horological canvas, to showcase not only savoir-faire but also artistry, as a point of differentiation. 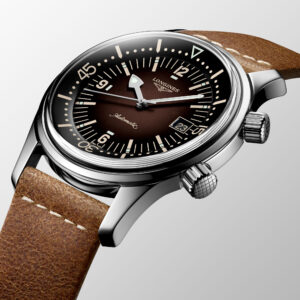 A faithful recreation of a vintage compressor, the Longines Legend Diver has attracted a legion of new admirers with each edition. It isn’t hard to understand – lacquered dials and printed markers make a harmonious combination.

At the most elementary is the printed dial. A nostalgic nod to a time when watchmaking was wholly artisanal, where each stroke on the hourly index was meticulously painted by hand, pad printing bridges the past with the present where automation ensures every dial meets the most stringent quality control. Bereft of applied indexes or any ornamental addition, a dial created from pad printing exemplifies the beauty of typography. Unnoticed by many but every aspect from the font type, to the size and spacing, to opacity and pigmentation is ferociously deliberated to ensure it is flawlessly realised as envisioned. Prior to printing, the base has to be thoroughly polished and cleaned to ensure no imperfection can ruin the eventual product. As simple as it may seem, this technique demands perfection. Pad printing can be employed on top of a lacquered or guilloché dial to impart a little extra to a heritage look. 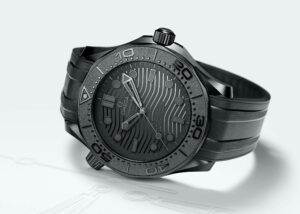 A advocate of laser ablation, Omega has made it a habit to engrave the dial of its Seamaster collection with the wave motif. The Seamaster 300M Black Black is a splendid exhibit of its endeavours.

Precision is a quality valued highly in watchmaking. Not only limited to miniscule components that regulate the accuracy of the movement, precision also governs every aspect of the case, lugs and yes, the dial. It is only expected then, watch brands have turned to laser for its reliability and where wavelengths and strength can be tailored to exacting standards. Laser beams can be fired upon materials like metal and ceramic to sculpt grooves, carve positive reliefs and smooth surfaces. It can even produce imaginative motifs where traditional machinery falls short. The anticipation is that laser ablation or engraving, where the process was established in the 1970s, will see increased usage in the years to come. 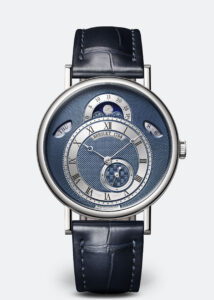 A master of guilloché, Breguet shows how the craft has been perfected in the manufacture with the Classique 7337 showcasing a symphony of patterns: circular grain d’orge on the edges of the hour chapter, damier checkerboard for the small seconds and Clous de Paris hobnail in the centre.

Used as early as the Middle Ages for the production of elegant objets d’art, guilloché came into watchmaking consciousness courtesy of the prescient Abraham-Louis Breguet, who established the art form as one of the seminal pillars of Breguet. Guilloché is a time-honoured decorative technique where precision is not demanded but expected. It takes years of steadfast training for artisans to attain the requisite skills to operate the rose engine lathe in order to create a perfectly engraved pattern. Today, watch brands persist with this onerous but richly rewarding technique for the mesmerising result. Clous de Paris, sunburst and flinqué are such beautiful motifs synonymous with guilloché. Enamel and lacquer can be employed in concert with guilloché for exclamation. 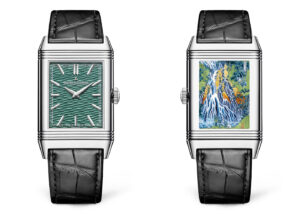 Lines are blurred between watchmaking and art on the Jaeger-LeCoultre Reverso Tribute Enamel Hokusai “Kirifuri Waterfall”, where the guillocheur and the enameller work in sync to accomplish an absolute masterpiece.

A prerogative of high watchmaking due to the ensuing complexity with provenance in pocket watches, enamelling is a highly specialised artisanal decorative technique. The process involves grinding pigmented glass into powder. The fine material is mixed with water or oil to form a mixture which is subsequently painted onto a metal disc. Once dried, the paste is fired in a kiln at temperatures as blistering as 850°C in order for it to fuse and attach to the metal base to form the enamel dial. This, however, is only the basics. There are numerous enamelling techniques that require greater mastery. A grand feu enamel dial is composed of multiple layers of enamel and thus it has to be heated repeatedly to obtain desired luminosity and translucence many have come to adore. Beyond which, we approach the realms of miniature painting. In cloisonné, metal inlays are deployed to create partitions for enamel powder to fill the chambers in between, while in champlevé, the metal base is engraved to form cavities which are filled with enamel powder. Enamelling is a costly process because defects can happen anytime during production. Crafted by hand, days are consumed to produce a flawless enamel dial that can withstand the passage of time. It is thence a watch festooned with an enamel dial is produced in very limited numbers, and quite often a unique piece. 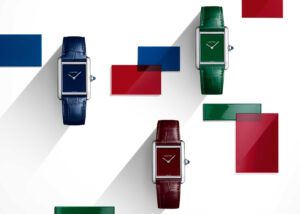 The Must de Cartier Tank collection accentuates minimalism with a lacquered in classic hues, perfect for iconoclasts who continue to defy trends and conventions to forge their own paths.

By virtue of a comparable sheen, lacquer serves a more economical way for one to get acquainted with the creamy translucence associated with enamel. A watch housing a lacquered dial is considerably less expensive than one with an enamel dial. Apart from affordability, there are several key differences between the two. A lacquered dial champions homogeneity throughout the surface, unlike enamel which is a manifestation of the artisan’s articulation and virtuosity. A lacquered dial also boasts better shock resistance. While white is an attractive hue, watch brands have begun to offer alternatives in blue, black, red and green. Though not a painstaking process in the domain of enamel, a lacquered dial requires patience too in its creation, where each layer awaits drying after it has been painted before another layer can be applied in situ. This process takes days to complete. 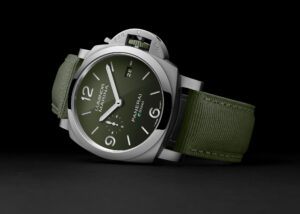 Visual depth can be created in many ways, such as through conventional applied indexes to bring forth three dimensionality. Although the purpose is also to bestow depth upon the surface, the approach to the sandwich dial is the antithesis of that of the applied indexes. In lieu of raised numerals, the sandwich dial features a layered composition and highlights hollowed out numerals. A product of the mid-century, the sandwich dial found a staunch ally in Panerai, who was tasked with naval supplies. By developing deeper grooves for the numerals, more luminous material can be embedded to improve legibility – an enhancement benefiting the Royal Italian Navy. The sandwich dial has since been adopted by other brands particularly in their vintage-inspired timepieces. 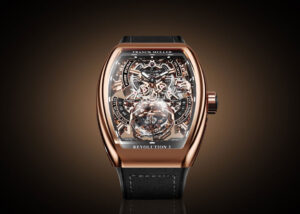 Resolutely modern, the poetic movement of the Franck Muller Vanguard Revolution 3 Skeleton is eloquently expressed within the constructs of the iconic and imposing tonneau-shape case. Coupled with a unique domed sapphire dome to accentuate the magnificent triple axis tourbillon, the result is anything but mundane.

Though it may seem a novel development given the sheer volume of openwork or skeleton watches made available over the past several years, the movement to reveal the calibre of a watch by not concealing it beneath a dial was rather circumstantial. According to the Fondation de la Haute Horlogerie, it started in the 18th century when horologist André-Charles Caron invented the first skeleton watch. The momentum is keenly felt in contemporary times as consumers begin to appreciate the intricate mechanism as an art form. Attuned to the increased appreciation, watch brands purposefully redesign their calibres to strive for aesthetic appeal. Driven by ingenuity, openwork and skeleton watches have also evolved, such as with the inclusion of a small dial featuring decorative techniques like guilloché, to complement the mechanical allure. More recently is the smoked or tinted sapphire crystal dial, permitting a glimpse into the calibre. On the Bvlgari Divas’ Dream Peacock Dischi, the time is indicated by a pair of nested discs decorated with peacock feather marquetry. The hour hand of the inner disc is adorned with a brilliant-cut diamond, while the pear-shaped brilliant-cut diamond recites the minute.

An exceptional art form, marquetry is derived from the French word for “inlay work”. The origins of the laborious process predate watchmaking with the foundation of the handicraft laid in ancient civilisations. Marquetry was revived and further developed in the 16th century by Flemish luxury cabinet makers. While ancestral examples consisted of furniture made exclusively with wood, marquetry materials today span leather, wood, feather, gemstone, metal, straw and mother-of-pearl, while motifs can be geometry, abstract and naturalistic. Akin to a jigsaw, in order to form a coherent motif, artisans have to piece together cut-outs in a process that calls upon dexterity. Since marquetry is still in its infancy in watchmaking, very few watch brands have so far offered this dial type. Due to scarcity, the watch is highly coveted.

Discover more watches on Cortina Watch online or drop by our boutiques for more information.