To send a message about sustainability, watch brands are showcasing environmentally-friendly options for their products – as well as specific “green” designs.

Environmentalism is at the top of everyone’s minds these days, as it should be.

That said, few industries attempt at touting their sustainability credentials more forcefully than fashion – and the watchmaking world is certainly committed to this valiant and extremely important effort.

No doubt, luxury watches are, in a lot of ways, sustainable in comparison to – say, fast fashion. The beautiful mechanical designs you often see are made to be kept, serviced and passed down from one generation to another.

Yet, there are still ways that watchmakers can improve on, both to lessen their carbon footprint, as well as help get the message out about saving the earth.

This year, there were several interesting sustainable actions taken by timepiece brands.

Zenith and Omega actually used recyclables to manufacture watch straps. The former reused excess high-fashion textiles and car components to achieve this, while the latter created yarn from fishing nets for its NATO designs.

Then, there are others that have released specific campaigns to capture attention and generate conversation.

For example, Bell & Ross teamed up with conservationist organisation Wildlife Warriors in an effort to continue the good work of Steve Irwin.

Certainly commendable, as these all can help raise awareness among watch enthusiasts on issues related to environmentalism.

Time To Reduce, Reuse and Recycle

One of the surest ways of reducing waste from the manufacturing of new products is to make them (or at least, certain parts of the whole) from other pre-existing items.

This was in partnership with another of its parent company’s enterprise, Nona Source. The LVMH start-up platform buys deadstock from the group’s fashion houses and resells it online.

Seven straps were released by Zenith in attractive designs such as bright pink denim, ivory curly mohair and vibrant yellow twill. All of them can be used for watches from the Defy Midnight collection. 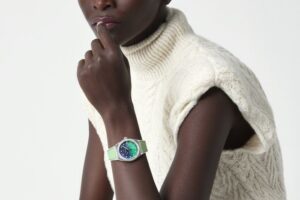 The Defy Midnight’s strap is metal, but it comes with two upcycled straps. Photo: Zenith

Introduced back in 2020, the Zenith Defy Midnight is a nifty watch that comes with three interchangeable straps. The recycled straps, in all its beautiful variations, thus complement the model’s selling point perfectly.

In July, Zenith was seen continuing with the sustainability leitmotif.

According to Zenith, the material is produced using a combination of Cordura, a type of synthetic fibre, and recycled rubber that comes straight from the Continental CrossContact tyres. 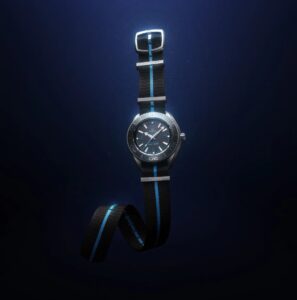 This is a full-on thematic message.

The original Ultra Deep watch accompanied adventurer Victor Vescovo all the way down to the bottom of the Mariana Trench in early 2019 – a mind-blowing 10,928m dive that set a new world record.

Omega has a legacy of supporting environmental conservation. For instance, the watchmaker’s partnership with the GoodPlanet Foundation and its founder Yann Arthus-Bertrand led to the award-winning documentary film Planet Ocean.

Currently ongoing are two projects for the restoration and conservation of the Indonesian coast.

These three-year endeavours, carried out in collaboration with local conservation activists, are designed to maintain an outstanding natural heritage and preserve local economic activities.

Crikey, Such A Beauty

If not made from recycled materials, specific watches can still help with sustainability efforts by becoming a “green” talking point.

It resulted in the BR 03-92 Wildlife Warriors Special Edition watch.

This black ceramic rendition of the popular tool watch features a distinct khaki colourway paying homage to the recognisable uniform made famous by Irwin through his illustrious career. It also features the Wildlife Warriors logo at 6 o’clock. 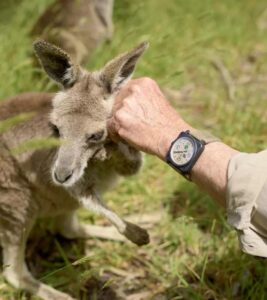 Irwin was known all over the world by his nickname “the crocodile hunter”. He was an Australian zookeeper, conservationist, television personality, wildlife expert and environmentalist.

As such, the tribute to him underscores a very important sentiment.

“Bell & Ross sees this partnership as an opportunity to extend its commitment to the important hands-on work that is carried out by the everyday heroes at Wildlife Warriors,” reads the description on the website.

“Bell & Ross has, over time, become a reference in the instrument watch field, as much on-road as off-road. Since its inception, the brand has produced exceptional models in its dedicated pursuit of superior performance.”

Of course, there are plenty of other ways that watchmakers have tried to send a message on sustainability.

Remember how Tag Heuer released a watch this year using lab-grown diamonds? While it caught attention for being more of a novelty material, such diamonds are believed to not cause pollution of air or water.

Cartier’s Coussin (French for “cushion) watch also made headlines when it debuted. The soft, squeezable case is made from intertwined gold links that are 3-D printed.

Again, sustainability was not the selling point, but it has to the pointed out that 3-D printing is favoured by environmentalists. Traditional manufacturing methods can be more wasteful, and consume large amounts of energy and raw materials.

In the very least, watchmakers have included sustainability as part of their brand mission – or they are seen launching relevant campaigns.

You have the Blancpain Ocean Commitment programme dealing with the preservation and exploration of the oceans.

Then is also Breitling’s partnership with the people-powered Sugi organisation, a commitment to making the restoration of biodiversity simple, shareable, and societally transformative.

All these are seen as a timely effort – something to be celebrated in the horology world.

Discover more timepieces online or visit us at our boutiques at your nearest location.