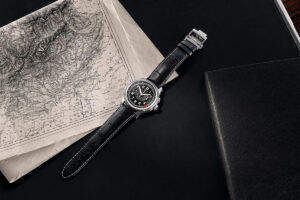 Throughout history, the human desire for exploration has led to new discoveries. From the first prehistoric men and women who ventured over the next hill or mountain, to the sailors who braved the high seas, the daredevils who learned to fly, and the mountaineers who set their own challenges. This spirit of adventure and exploration has always been at the heart of Montblanc with the creation of diverse timekeeping instruments to accompany the fearless on their adventures.

The 1920s and 30s were the formative decades of aviation with rapidly advancing technology and the start of both civilian and military flights. A reliable timekeeper was an essential piece of a pilot’s equipment and a Swiss manufacture in Villeret, called Minerva at the time, was at the forefront of producing professional stopwatches and chronographs for navigation and tracking time in the air.

In 1927, the Minerva Manufacture in Villeret was among the very first manufactures to make a fluted bezel and an internal countdown rotating bezel. This was followed in 1939 by its first wrist watch chronograph with an external rotating bezel and a reset function.

Over the years, Minerva became a leading specialist in professional watches for measuring elapsed time with high precision, using accurate in-house movements such as the Calibre 19.09 or the Calibre 13.20. The manufacture is noted for having created both pocket watches and wristwatches with fluted bezels for both officers and non-commissioned officers with black dials and luminescent numerals and hands. 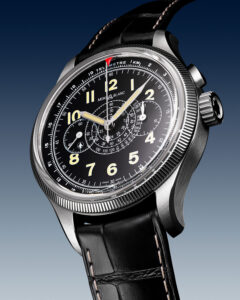 The key elements from the past include a fluted bezel, this time in 18K white gold – for easy use with pilots’ gloves – and the Maison’s signature red arrow that allowed a quick and easy reading of elapsed time. The red arrow is a nod to the Roman Goddess Minerva, the goddess of craftsmanship, who carried a spear with an arrow at its tip. The timepiece comes in a 42mm stainless steel case with a special engraving on the case back and is completed by a black alligator leather strap with beige stitching. (Pictured: Ref. 129614)

A look at the dial

A jet-black dial is enhanced with beige Super-LumiNova hands and Arabic numerals glowing green in low light. There is also a telemeter scale that runs around the outside of the dial – a typical feature of these legendary chronographs – as well as a tachymeter (base 1000) in the centre of the dial in a colimaçon snail shape. A 30-minute chronograph counter is located at three o’clock, a small second counter is positioned at nine o’clock, and the chronograph seconds are indicated by a central hand. The red arrow is a nod to the Roman Goddess Minerva, the goddess of craftsmanship, who carried a spear with an arrow at its tip. (Pictured: Ref. 129614)

The design of the original Minerva aviation watches was a direct result of the needs of early-day pilots for supreme legibility. The Montblanc 1858 Minerva Monopusher Chronograph Red Arrow LE88 reproduces this legible style with its black dial and luminescent details. The timepiece comes in a 42mm stainless steel case with a special engraving on the case back and is completed by a black alligator leather strap with beige stitching.

This limited edition of 88 pieces is a beautiful reminder of the courageous men and women who took to the skies in the early days of aviation. Their courage and passion for exploration are transmitted through time with this vintage-inspired timepiece that brings the best of the past into the present.

Unveiling the Secrets of a Historic Minerva Chronograph 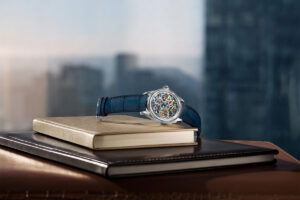 The Montblanc Unveiled Secret Minerva Monopusher Chronograph turns the movement over to reveal all its beauty.

When it comes to complicated watch movements, the chronograph is without a doubt one of the most mesmerizing with all its intricately linked components that come into play to display elapsed time. And when that movement is based on the historic Minerva MB 16.29 monopusher chronograph calibre, the magic is off the charts!

But there is more to this story. The new Montblanc Unveiled Secret Minerva Monopusher Chronograph Limited Editions not only feature this iconic hand-wound MB 16.29 movement with all its meticulous hand-finishing, but the movement has been flipped over to display all the incredible mechanical action on the dial side of the watch. At first glance, the viewer may think it is a skeletonized movement, but a closer look reveals that this historic chronograph movement is on full display, in all its glory, on the dial side of the watch.

In 165 years of Minerva history, this has never been done before. It is surprising when you think of how many watch lovers remove their chronographs to admire the movement through the case back. Well, now they don’t have to! 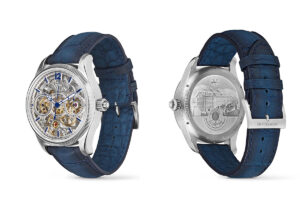 The Montblanc Unveiled Secret Minerva Monopusher Chronograph Limited Editions include a fluted bezel inspired from a Minerva design that dates back to 1927. (Pictured: Ref. 129613)

Turning a movement over sounds simple, but it is a technical feat as the direction of the hands also has to be reversed. The MB 16.29 calibre was one of the only movements in Montblanc’s stable of chronographs where this could be achieved and reversing the time required the addition of 21 components, making this more than an aesthetic feature, but a truly technical one too.

And just for fun, the Maison has turned the last digit of the reference number upside down to represent this change, so MB 16.29 becomes MB 16.26.

When the Movement Becomes the Dial

Looking through the sapphire crystal into the depths of the movement, the viewer can immediately perceive the incredible level of finishing on the sanded German silver movement. A keen eye will detect the Maison’s special snailed diamantage coquille motif and polishing, which includes the inner angles of the components, a feat in itself.

In keeping with all Montblanc’s highly complicated movements, the iconic Minerva arrow and the Maison’s “V”-shaped bridge are also on display. The Minerva arrow is a tribute to the Roman Goddess who is always depicted with her arrow-tipped staff in hand, and the unusual “V”-shaped bridge comes from the view of the mountains seen from the watchmakers’ window in Villeret, a sight that has been a constant since the founding of the workshop in 1858. 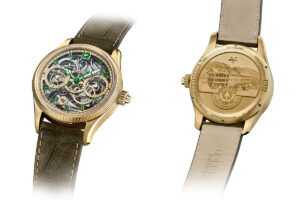 Both models feature an engraved caseback with an image of the Villeret manufacture and the famous “V”-shaped mountains in the background. (Pictured: Ref. 129622)

Particular attention has been paid to the indications so that they don’t distract from the movement with an open-worked 30-minute chronograph counter, an open-worked small seconds display, and elegant hands and indexes that have been enhanced with Super-LumiNova® for enhanced legibility.

In addition to the upside-down chronograph movement, the Montblanc Unveiled Secret Minerva Monopusher Chronograph Limited Editions include a fluted bezel inspired from a Minerva design that dates back to 1927. This strong design element frames the movement and further accentuates all the horological expertise that makes these timepieces so special.

There are two limited editions of 18 and 58 pieces, in Lime Gold and stainless steel respectively. Both come in a case side of 43mm and are fitted with a fluted bezel, the sign of an exceptional Montblanc timepiece.

The Lime Gold version displays green hands and numerals and comes on a green alligator leather strap with grey stitching that is in total harmony with this warm-coloured gold. The stainless-steel edition features a white gold fluted bezel, adding an extra level of finesse to the model, and comes with a blue alligator leather strap with blue stitching. Both models feature an engraved caseback with an image of the Villeret manufacture and the famous “V”-shaped mountains in the background. 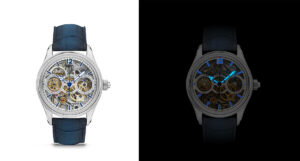 Particular attention has been paid to the indications so that they don’t distract from the movement. (Pictured: Ref. 129613)

These Montblanc Unveiled Secret Minerva Monopusher Chronograph Limited Editions unveil the secret of watchmaking past in timepieces that are resolutely contemporary for today’s watch lovers.

Discover the Montblanc collection online or at our boutiques at your nearest location. As part of the latest waves of its brand campaign - What Moves You, Makes You - Montblanc...