The ins and outs of Patek Philippe’s most definitive complication – the perpetual calendar – and the exotic weekly calendar.

Given the peculiarities of the solar Gregorian calendar, fashioning a tiny mechanism that can effectively display the day, date, month as well as leap year is a truly remarkable feat of engineering. After looking at the simple and annual calendars of Patek Philippe, the second instalment of our series looks at the mother of all date complications – the perpetual calendar – prized for its convenience and complexity and further delves into the brand’s latest, most unusual calendar complication – the weekly calendar.

The most sophisticated of all calendar complications, a perpetual calendar correctly displays the day of the week, the date, and the month “perpetually”, taking into account the varying lengths of months as well as leap year cycles. Unlike an annual calendar, which needs re-setting once a year at the end of February, a perpetual calendar only requires a correction after every full century when the Gregorian calendar omits a leap year. The Ref. 5327G with the perpetual calendar displayed in three sub-dials.

In contrast to the gear-based construction of Patek Philippe’s annual calendar, the perpetual calendar mechanism relies on a grand lever to control the movement of the wheels for the day, date, and month indication. The perpetual calendar mechanism in the 240 Q. Visible right in the middle of the movement is the grand lever which samples a 48-month cam at 12 o’clock.

As a rule of thumb, all Patek Philippe’s perpetual calendars with triple counters employ a 48-month cam while other configurations utilise a 12-month cam.

The 48-month cam turns once every four years, with several notches of varying depths that corresponds to the length of each month, with the deepest being February. The grand lever, thus, pivots varying amounts based on the month – further for short months and lesser for long months. At the end of the month, the grand lever “catches” a cam and forces the date change. Thus, if the grand lever pivots further, it does the “catch” at an earlier date.

On the other hand, the perpetual calendar with a 12-month cam completes a full turn in a year and relies on a satellite wheel to manage the leap month of February. The satellite makes a 90° rotation once a year, completing a full rotation in four years. 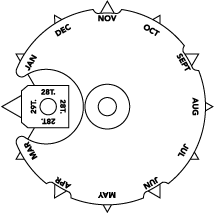 The 12-month cam with a satellite wheel for February.

Just as the construction and displays may differ, the way in which the indicators advance varies equally. In a standard perpetual calendar, the indicators “drag”, changing gradually over several minutes around midnight. At the top of the line is the instantaneously jumping mechanism, in which the day, date, month, and leap year advance instantaneously and simultaneously at midnight thanks to a large, 15-part yoke. This can only be found in Grand Complications models such the Ref. 5207 (with minute repeater and tourbillon) and the Ref. 5208 (with minute repeater and chronograph). The Ref. 5208R with a minute repeater, monopusher chronograph and an instantaneous perpetual calendar.

Today, Patek Philippe offers the richest array of perpetual calendars in the market. They vary in terms of styles of display, cases, construction as well as complications, with the most recent being the In-line Perpetual Calendar Ref. 5236P, featuring a new display and movement, which you can read about here. You can also check out the perpetual calendars that were launched last year over here. In 2019, Patek Philippe unveiled the most unusual calendar complication in its current catalogue with the Calatrava Weekly Calendar Ref. 5212A. In addition to the day and date, the watch also indicates the current week of the year along with the corresponding month. The weeks are numbered according to the ISO 8610 standard, which determines that Monday is the start of the week and the first week of the year is the week containing January 4. The date is displayed in an aperture at three o’clock while the other calendar indications are displayed in concentric scales, indicated by two centrally mounted hands in addition to the main hour, minutes and seconds hands. Like the single and double calendars, the weekly calendar requires manual correction five times a year for months with fewer than 31 days.

Often undervalued yet essential in calendar watches, safety features were implemented to allow the user to adjust the indicators at any time of the day or night without damaging the movement. The day and week number are adjusted via a pusher at eight and 10 o’clock respectively while date is adjusted via the crown.

The watch is powered by the self-winding caliber 26-330 S C J SE, which was based on the caliber 324. The base plate was milled to accommodate the calendar mechanism, therefore achieving a thickness of just 4.82 mm. The calendar mechanism comprises a total of 92 parts including a pair of seven-point stars – one on the hour wheel that controls the day-of-the-week display and one that drives a 53-tooth week wheel via a lever. Visible right above the central axis of the movement in the following image, the latter star features an elongated point for Sunday to trigger the start of a new week. 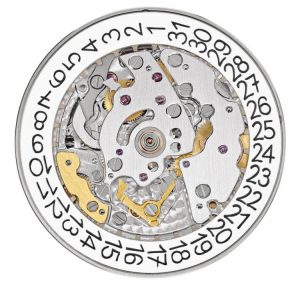 The semi-integrated calendar mechanism in the caliber 26-330.

Beyond the calendar, the caliber 26-330 S C J SE also boasts several notable technical enhancements. To eliminate backlash, the driving wheel for the centre seconds indication is made up of sprung teeth, which is made possible with the use of a micro-electro-mechanical system known as LIGA (the German acronym for Lithographie, Galvanoformung, Abformung) – a process that allows for extremely precise fabrication. The unique geometry of the wheel ensures deeper penetration between teeth as they mesh, thereby removing all play. 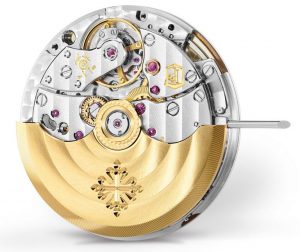 The back of the caliber 26-330 with the uniquely shaped drive wheel for the seconds visible between the rotor hub and the fourth wheel.

The caliber also incorporates a stop-seconds mechanism to facilitate precise time-setting, as well as an improved self-winding mechanism with a patented clutch wheel that winds the barrel in one direction and uncouples it in the other.

Additionally, it bears noting that Calatrava Weekly Calendar Ref. 5212A-001 is the only steel Calatrava within the current collection today. This, along with the unusual complication and the quirky typography which was derived from the handwriting of an employee, makes for an extremely unique and compelling timepiece all round.