Blancpain marks Cortina Watch’s golden anniversary with an exclusive edition of its three-hand Fifty Fathoms Bathyscaphe.  Limited to 50 pieces, this watch is a rare two-tone rendition of the watchmaker’s everyday dive watch.

Cortina Watch, one of Singapore’s most respected names in watch retail, proudly celebrates its 50th year in business in 2022. To commemorate its Golden Jubilee, Cortina Watch is introducing several special and limited edition timepieces with longstanding partners in watchmaking. This May, Blancpain will be presenting an opulent collection comprising a limited edition created together with and exclusively for Cortina Watch’s anniversary celebrations.

To mark the launch of this unique rendition created especially for Cortina Watch’s anniversary festivities, Blancpain will be presenting the ‘Fifty Fathoms Bathyscaphe’ exhibition at the main atrium of Paragon Singapore, from 23 May to 5 June 2022.  The exhibition will be accessible to the public daily from 11am to 8pm daily.

Blancpain gave the world its first true professional dive watch in 1953 with the unveiling of the Fifty Fathoms. Engineered and designed to serve the world’s diving pioneers, including the French Navy’s Combat Diving Corp.’s, the timekeeping instrument boasted nearly 90 meters of water resistance, a feat made possible thanks to a ground-breaking implementation of rubber gaskets used for the crown and caseback. It was also fitted with an innovative unidirectional rotating bezel that could be used to time dives. At 42 mm, the timepiece presented excellent legibility paired with large luminous markers on its dial and a bakelite bezel insert; it had a soft iron antimagnetic inner case shield and many more inventive qualities that cemented the Fifty Fathoms’ destiny towards greatness from the very beginning. Following up on the success of the Fifty Fathoms in military service and having observed a rise in the interest for recreational diving, Blancpain brilliantly launched the Bathyscaphe model in 1956, as a reliable everyday tool watch for the civilian enthusiasts. Today, some seven decades on, the Fifty Fathoms and the Fifty Fathoms Bathyscaphe have transcended to become revered luxury timepieces, highly sought after by connoisseurs, offering the versatility of both extraordinary reliability and quiet elegance.

Blancpain has been a part of Cortina Watch’s offerings as early as in the 2000s.  Now, in commemoration of the retailer’s golden anniversary and in recognition of the importance of their long-standing partnership, Blancpain is proud to introduce a 50-piece special Fifty Fathoms Bathyscaphe for Cortina Watch.  Speaking about their two decades of shared passion, CEO of Cortina Watch Mr Jeremy Lim said, “Blancpain and Cortina Watch have shared a close-knit relationship since the beginning of our partnership in the early 2000. For the 50th anniversary limited edition timepiece, we tried to retain the aesthetic codes of Blancpain’s original Bathyscaphe model back in 1956, and at the same time infused elements of individuality. I hope our enduring relationship will continue to strengthen and flourish for the next 50 years and many generations to come.” President and CEO of Blancpain, Mr Marc A. Hayek, congratulated Cortina Watch on this milestone saying, “Congratulations to Cortina Watch on its 50th anniversary. As the world’s oldest watch brand, Blancpain is proud to showcase its watchmaking expertise and DNA in collaboration with this strong and long-time partner, which contributed to strengthening our presence in Southeast Asia.” This model is a rare two-tone version which combines the understated colours of brushed titanium and Sedna® Gold.

The 43 mm limited-edition Fifty Fathoms Bathyscaphe is forged in titanium with a sharp silhouette and satin finish that exudes a sense of stealthy refinement. Set atop is the Bathyscaphe’s robust unidirectional bezel in Sedna® gold — a gold, copper and palladium alloy guaranteeing exceptional durability — fitted with a ceramic bezel insert and Ceragold® markers. The black vertical brushed dial of the timepiece provides for a striking contrast and features sizeable Sedna® hour-markers and hands, all of which are generously filled with Super-LumiNova® for superior legibility in the dark.

The sapphire crystal back of the timepiece has been printed with the words, “Cortina Watch 50th Anniversary Since 1972” in declaration of the milestone it has been made to celebrate. Looking further through the watch’s caseback, we see the in-house Calibre 1315 beating within, which represents a technical and precision timekeeping benchmark in the realm of luxury sports watches. Born from the pursuit of accuracy and performance, this self-winding movement with three series-coupled barrels, totalling five days of power reserve, features a silicon balance-spring that renders it impervious to the detrimental effects of magnetism. It is also distinguished by a high level of finishing that is synonymous with Blancpain, with a sandblasted, satin-finished oscillating weight to top it all off. 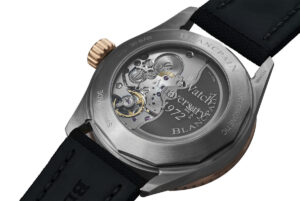 The sapphire crystal back of the timepiece has been printed with the words, “Cortina Watch 50th Anniversary Since 1972” in declaration of the milestone it has been made to celebrate.

Beyond its technical merits, Blancpain’s Fifty Fathoms Bathyscaphe for Cortina Watch is ultimately an enduring symbol that all at once represents Blancpain’s nearly three centuries of watchmaking mastery, its pioneering spirit in having created the world’s first professional dive watch and Cortina Watch’s own pioneering spirit, which has played a crucial role in shaping and progressing the culture of horology in the Asia Pacific for the past 50 years with many more years yet to come.

The Happy Sport – Tale of an Icon Exhibition in Singapore Blancpain Bathyscaphe In Titanium: A Bold...

True to the legacy and sporty-chic style of its predecessors, the latest addition to the... Inspired by a highly sought-after 1950s Blancpain chronograph that was produced in tiny... A Diver’s Watch Born in the Desert

The 500-piece Blancpain Bathyscaphe Day Date Desert Edition tells a story unlike any other.